Have you seen the film Big Short? Most of you probably do, as it is a famous Hollywood film, which reveals the story of one extraordinary investor who made billions of dollars betting against mortgage securities during the 2008 financial crisis. It was a real story! This investor, Michael Burry, continues his financial career and he has recently sold the largest number of Tesla shares he has ever sold: 800,100, that worth $534 million. Thats a lot! He compared the hype around Tesla to the housing bubbles in 2008.

Teslas stock price rocketed to the historic high of $900 in late January but has dropped by more than a third since then, to nearly $570. Teslas market capitalization has fallen from almost $870 billion at the peak to below $560 billion.

Indeed, Tesla is having a tough time these days. It is trading at its lows partly because of Musks speculations over Bitcoin. First, he said that Tesla would not accept Bitcoin as a payment and tweeted that Tesla might have sold or would sell its remaining holdings in Bitcoin. Then he claimed, Tesla has not sold any Bitcoin." Investors were angry with Musk, as they have lost money because of his actions. For some time, #donotbuytesla has been a trending hashtag on Twitter. A lot of attention is focused on crypto, Musk, and Tesla these days. Thus, its really important to follow this news!

Tesla has been moving inside the descending channel since early April. If it breaks below yesterdays low of $560.00, it may fall to March low of $540.00 and then even to the psychological mark of $500.00. The RSI indicator signals the stock is oversold as the indicator is below the 30.00 level. However, the stock isnt likely to reverse up now amid all these negative factors. We might see more sell-off before Tesla has a chance to rise again. Resistance levels are at $600 and $620 the recent highs. The good news for Forex Traders is that they can open both buy and sell trades. 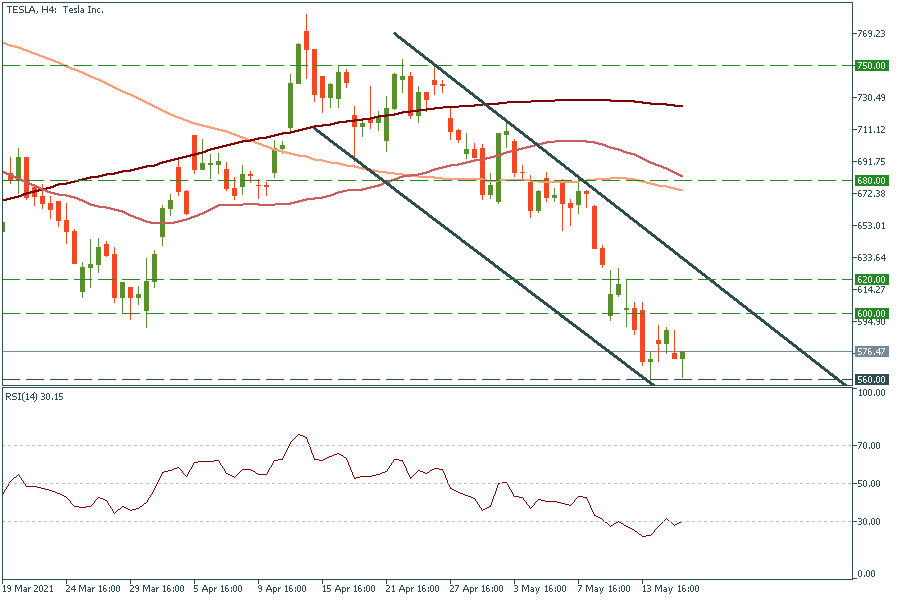 Dont know how to trade stocks? Here are some simple steps.

Which companies will publish EPS on April 19-23?

Stocks that make news this week